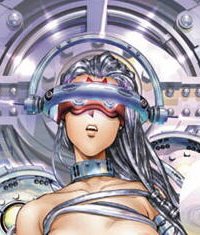 Born November 23, 1961 in Kòbe, Hyogo Prefecture, Japan. Its real name is Masanori Ota, Shirow is a pseudonym chosen in honor of the famous Masamune gunsmith.

As a young man he studied oil painting at the University of Osaka but developed his passion for manga during his college years. His first work, entitled Black Magic, was published by the Atlas fanzine. From here the contact with the Seishinsha and its president, in particular, who agreed to publish his first work.
From this moment on it is history. The birth of Appleseed, a story never really completed but rewarded in long and wide, followed by Dominion and, finally, the work that brings it to the fore (if still there it was needed) Ghost in the Shell.

Its popularity today runs the world far and wide; one of the first Japanese artists to be published in many countries, including the United States. In fact, his trait is very close to Western design styles. But the role played by Ghost in the Shell in its popularity is undoubted. The animated transpositions (feature films and TV series) have certainly helped to make known his charismatic characters (female in the head), the intense stories, but above all his futuristic / sci-fi universes always at the base of his stories.

"The imagination and ingenuity of Shirow, in addition to its trait, have given life to complex and fantastic reality far from our days, but so real and so intense as to be able to conquer many fans. A genius of incalculable value."