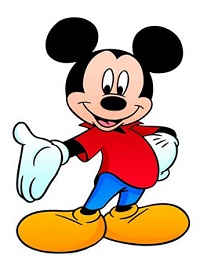 The famous character is celebrated all over the world as one of the most popular invented characters in history.

Is the undisputed protagonist of the Disney brand, as well as his mascot, with a large number of animated productions of short and medium length, but always relegated to the home market. The whole world of characters born later, like Minnie's girlfriend, friends, relatives, etc. they represent the right complement to his life; adventures that have been able to entertain many generations of children and not, and that continues to do so.

Mickey is married to Minnie and has two nephews, Morty and Ferdy.
He has numerous talents acquired over the years: he is a skilled detective, a mind-blowing magician, a diplomat and a well-known leader.
He also has a tandem appearance with Bugs Bunny, mascot of rival studios Warner Bros., in Robert Zemeckis Who Framed Roger Rabbit.

His filmography is a bit long to remember, think that he currently has more than 170 titles.